To chat with us during our live shows, click the button to join our Facebook chat group.

Powered By Passion – Radio Like It Used To Be…

What makes us different? A desire to produce an entertaining, unique music platform for independent artists, while delivering a personal approach to programming.

You can also listen to us on

Click the links to get the player from Streema or the apps from the Google Play Store/Apple AppStore for OnLineRadioBox or install the Alexa Skill from the Amazon Skill Store – just say: “Alexa, play Topcat Radio.” or on a Google Smart Speaker – just say: “Hey Google, talk to Topcat Radio.”

Many thanks to our generous supporters:

You can support TopCat Radio too. Keep us streaming.

Live shows and the first broadcast of guest shows are in bold. 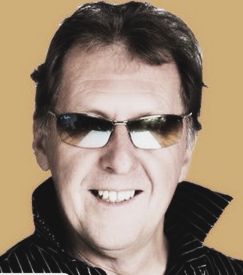 “Music is my passion. I have been a professional singer for over 40 years. I studied music (performance/studio recording and live sound), I have performed live all over Europe, been interviewed many times and had several TV appearances. I came to Catalonia and believe I became the first English-language radio presenter on Radio Mora FM and la Cala RTV, and produced radio for the federation of radio stations in Catalonia.

I relocated to Catalonia in 2008, and five years ago set up Catalonia Radio – because I was disillusioned by local radio here. At that time I was writing in the Catalonia Today magazine too about radio. The internet was not so good then and my listeners seemed to be everywhere except Catalonia.

My programmes are now well accepted in Catalonia on Epic Radio, but that is based in Canada. So I have decided, to launch once again an English-language station dedicated to Catalonia’s people and songwriters. Welcome to TopCat.”

Rolling Back The Years 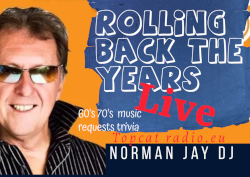 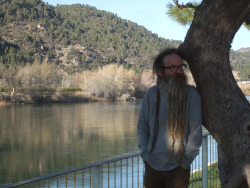 Paul also lives in southern Catalonia on an off-grid olive finca. He does the tech and online stuff for TopCat – runs the radio server and website (more details at the foot of the page). Provides online services under the elsmussols.net banner. Passionate about music generally and Free & Open Source Software. 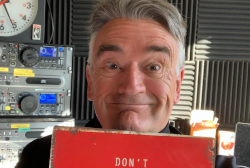 Having commenced a technical apprenticeship in engineering, I was, to quote my lovely Dad, “hijacked by music”. Largely due to the influence of Radio Luxembourg and later, the so called “Pirates” I felt compelled to follow the dream and began to DJ everywhere I could. I worked in Denmark and Spain and virtually every venue in Coventry and surrounding areas. I have continued to follow my passion whenever possible.

I have a discotheque road show called The Memphis Train and more recently I also make internet radio contributions from ”The Strawberry Studio” a purpose-built studio at my home in Warwickshire.

Steve lives in London, UK and is a lifelong musician having picked up the guitar at twelve years old.

He loves all types of music and has played in many different types of bands from blues to dance to jazz to folk.

He is still playing in bands and love every minute of it. Steve has a special love of the Blues and sharing that love with people on the radio is a real privilege. 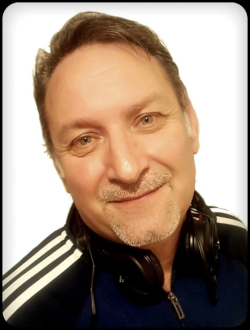 My passion for music drew its first breath when Radio Rentals took our TV away. I was ten years old. Not being one who waits to be entertained, and being of a curious nature, I decided to explore my mother’s vast record collection, the bulk of which represented the genres of folk and country. But, hidden in its depths were some real sonic treasures. After a short search, I unearthed Bob Marley’s Burning and the Wailers albums, Donny Hathaway’s Extension Of a Man, and the complete works of Ray Charles and Millie Jackson. This was truly my Eureka moment!

Now I had a new passion, now I could see a path before me, one that I would follow from that day forth. Paper-round money was now being used to service a new addiction – a new hunger.

No longer would I be visiting the local toyshop to buy yet another Airfix Spitfire (1:72 scale) to cover in inappropriately-applied glue. No, from now on, it was now the racks of vinyl in my local record stores that beckoned me with their seductive contents. Aylesbury’s Record House, Earth Records and Our Price were my after-school haunts. Even now I can still recall, as if it were yesterday, the alluring scent of clean, fresh vinyl that permeated these (what were in my mind) palaces, these shrines dedicated to music, sanctuaries where I could escape from the world and be Me.

The Grundig radiogram, my then pride and joy, with the glow of its valves radiating evocatively through the louvered vents of the rear cover, would now be pumped to the max, and my my bedroom window would be wide open. This was the life, sharing the music I loved with the kids playing outside my house, while Mother would scream her own chorus of disapproval, “NEIL! TURN DOWN THE BASS!”. I knew it in my heart, my blood, my soul, I wanted to be a DJ.

So now you know a little more about me from my perspective. In the eyes of others I’ve been described as (amongst other things that I think I’ll keep to myself!) charmingly and uniquely amusing, but I will let you, my beautiful listeners, be my judge…

I look forward to playing my music for you. – Greavsie Kimbo has been a DJ since a teenager, he first started tuning in to pirate radio catching the radio bug. He built his own mixer using two record players and a tape deck allowing him to play the music he enjoyed.

He kept an interest through all the changes in radio over decades, liking any music style and went on to become a mobile DJ playing at minor venues around London.

After a spell in the wilderness due to family commitments he found he could come back to his interest through a local community radio station. He joined it from its inception on the internet to becoming an FM station.

Gary Hopkins – A Blast From The 80s

Playing the greatest hits from the 60s, 70s, 80s and 90s via dedicated shows and the best UK, US and worldwide retro charts. 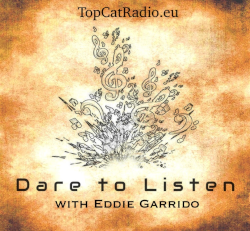 Eddie Garrido is from Mexico, his father was a musician, and has toured Spain and lived in Madrid. Eddie is also a fine composer and musician living in the United States. His new jazz show is exclusive to Topcat Radio.

Vimal Korpal – Me, Myself and I

Me, Myself and I features new sounds, new music and new voices. A variety of music sourced locally as well as from around the world – whether that’s indie, hiphop, dance, folk, country or electric.

There is a sprinkling of humour and craziness all presented to you by Vimal Korpal.

On each show, we will be focusing in on one or two songs to bring you the story of the song (The Cover Story), as well as creating a new “Cover Chain” each week, where we try to link different cover versions together. Then we end each week with an Obscure Original of a song you probably didn’t realize was a cover. The show is produced in association with SecondHandSongs.com the online database of cover versions.

Al is a podcaster and radio presenter. As well as SecondHandSongs, he also hosts The Bear Cave Radio Show and is co-host of the 3 Amigos podcast. He is also the founder of SuperPod: TheCharity Podcast Festival. He got his start in radio at Southampton Hospital Radio before studying Radio Production at university, helping to set up a new student radio station in north-west England.

Cover versions have long been a passion of Al’s, and he says that getting to bring you his favourites and discover new covers through this show is a real delight. 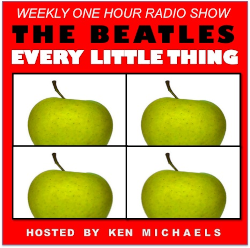 Ken began his radio career at college radio station WNYT (New York Institute of Technology, Old Westbury, NY) in 1981, where as Disc Jockey he handled several of their music formats – oldies, rock, and his weekly Beatles show (later named Every Little Thing) in March 1982. While he’s enjoyed being on the air on other radio formats – adult contemporary, and album oriented rock, he’s best known for nearly 40 years of several different Beatles shows, including podcasts, and his own YouTube channel.

Creating a Beatles show unlike any other with Every Little Thing, the programme mixes the entire catalogue of the Fab’s group and solo recordings, plus features, cover versions of their material, side projects, tribute songs, novelty records, family members, artists on the Beatles’ Apple label, etc. Ken also includes Beatles trivia and a wide variety of games testing fans’ knowledge of the Beatles music and history. Many shows have original interviews with people in the Beatles world, and every show includes a unique thematic set, focusing on everything from the serious (John Lennon political songs) to the silly (song titles that rhyme). Anything is up for grabs in this show which caters to both the casual and hardcore fan.

Every Little Thing was heard first on WNYT (1982-83), then for ten years on New Jersey’s Album Rocker WDHA-FM (1983-93), followed by Long Island’s Oldies station B-103 during the Beatles Anthology craze, and later on XM Radio on their eclectic music channel, Fine Tuning (2003-09). His show was syndicated in 2011, and currently is heard on over 45 stations. Ken developed his own website which features much of what you’ll find on Every Little Thing – loads of interviews, weekly Beatles trivia, and more!

Ken also became co-host for several Beatles podcast, including Things We Said Today started in 2012, and Talk More Talk: A Solo-Beatles Videocast. Both shows are heard on many platforms, including iTunes and their own YouTube channel. As if that wasn’t enough, Ken’s new YouTube channel has him interviewing musicians, authors and fellow podcasters who have dedicated their time and livelihood to the Beatles. 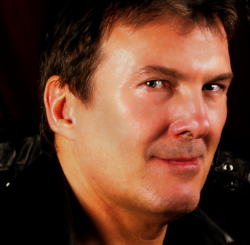 I’ve been listening to rock music all my life, right from childhood! I love all genres of rock, there’s such diversity. I’m a big fan of ’50s/’60s rock n roll where it all started, and my favourites were Eddie Cochran, Buddy Holly and Bo Diddley. I like my music heavy, be it hard rock, metal and all the variations that took place, even Punk, Grunge, Glam and Nu Rock. I started my music career as a gigging DJ, but now love being a radio presenter on internet radio. I’ve worked on stations in the USA and UK but love the potential of Topcat Radio and glad to be part of it. I have a wealth of stories, thoughts and observations about the many concerts, festivals and shows I’ve been to and the people I’ve met. So come and say hi on our Facebook Page, let me know your views on the tracks I’ve played, and request some of your favourite songs.